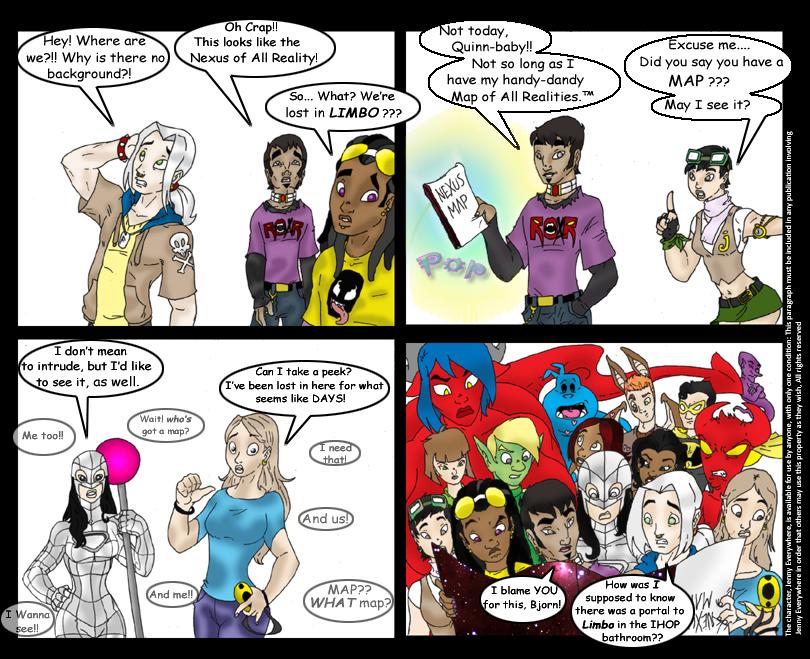 Phoenix In Crisis 21st Aug 2016, 4:04 PM
Bjorn, Quinn and Monroe get a little lost.
(Those IHOP bathrooms can be treacherous).

Looks like they're not the only ones.
Featuring a lotta webcomic folks who didn't take that left turn at Albuquerque, and found themselves in Limbo, which, for the purposes of my comic is the Nexus of All Realities.
(And you Marvelites thought it was Man-Thing!)
The cameos are as follows:

Back Row: Baala the demoness from the Webcomic, Pawn. Skull from PVP. “The Demon” from Friendly Hostility (whose real name is a long series of impronouncable symbols that, when spoken aloud cause nosebleeds in humans). the parallel universe version of Captain Heroic from Evil, Inc.
Lenny the Djinn from Accidental Centaurs.

Middle: Ayanah, Baala's partner from Pawn, Zortic from the comic of the same name. My own Stella and Celeste. And the Devil Phil from Living In Greytown.

Bottom Row: Jenny Everywhere, an open source comics character who has graced many a webcomic, and, being open source, is a permanent cast-member of many of them.
The 3 protagonists of Misfits of Mischief: Quinn A., Monroe C., and Bjorn L. (Mindmistress is between Monroe and Bjorn), and last but not least is Cassie Wells from the brilliant Times Like This.
edit delete