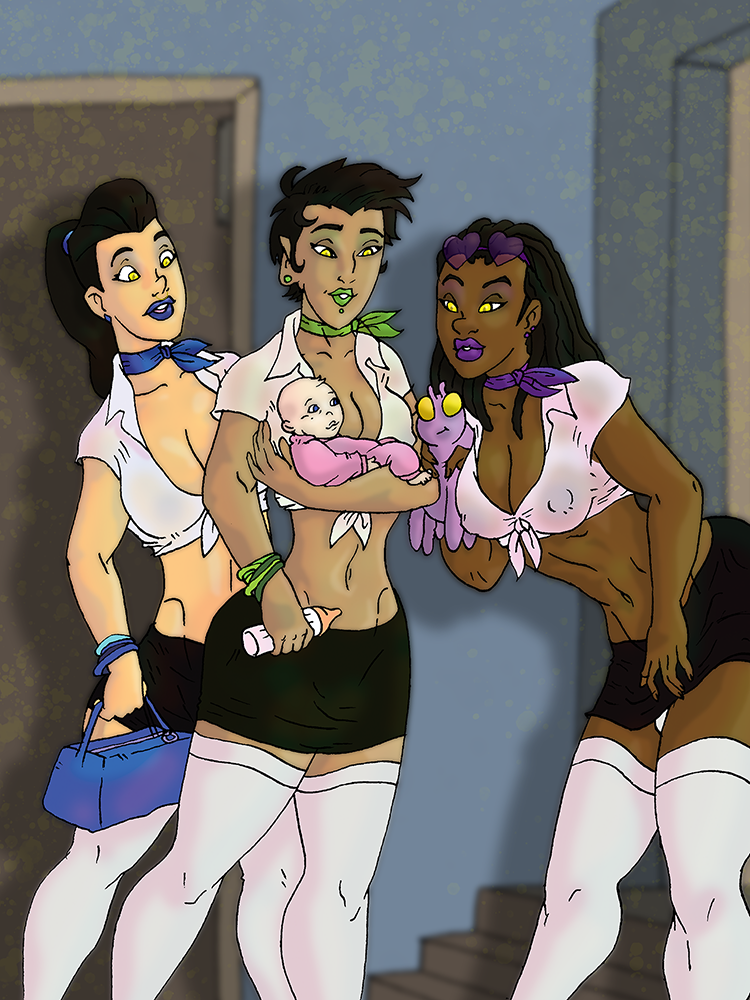 Octopus Ink 18th Sep 2021, 4:10 PM
The Misfits of Mischief volunteer themselves as babysitters for the newborn baby Claire Jones - daughter of the most powerful heroine in the Beholderverse, Centennia and her lady love, Kate Five.
The baby, due to develop superpowers and being the child of two well-known supers with super-enemies, could be in no safer hands than those of three chaos demigods.

The reason for the genderswitch affectation?
Centennia and her baby are currently living with former-villain-turned-hero Captain Perfect... who HATES the Misfits, as they sexed up his girlfriend, the superheroine, Jeanette Oberheim, for three weeks solid!
The libidinous super-lothario would try to mash them on sight if he ever saw them again - so they gave him something ELSE to look at that would be a sufficient distraction.

Octopus Ink 18th Sep 2021, 6:20 PM
Thanks! The full story can be found in the Misfits of Mischief DeviantArt account - HERE.
edit delete reply

Toorambunctious1 18th Sep 2021, 6:59 PM
You're welcome. And I'll definitely check it out.p.s. thanks for sending me the link.
edit delete reply

THE_BEHOLDER 11th Oct 2021, 5:42 PM
They take their new role seriously and are very dedicated, you’ll have to give them that! Even switching their identities! But then, they are not beholden to our narrow definition of gender or identity. Way above that stuff! Probably, they felt like switching things up a bit anyway!
edit delete reply
Post a Comment