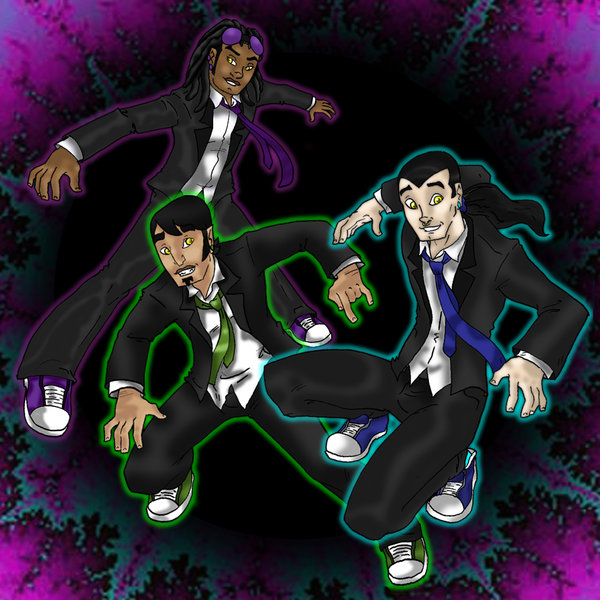 Xailenrath 6th Sep 2016, 11:11 AM
Travelling through space and time, and always looking for a GOOD time, are Bjorn Loki, Quinn Anansi and Monroe Coyote.

They are a trio of bastard (in the dictionary sense) trickster demigods. Sent out on the run by their sorcerous mothers into the "space between spaces", aka the nexus-river between realities called The Crease.
The trio believe themselves to be in hiding from their powerful fathers (their home reality's versions of Loki, Anansi the Spider and The Coyote Spirit) who wish to eliminate them.

In their dimension of origin, The gods and goddesses of myth are still around and interact with humanity on a daily basis. Their dads, those famed Trickster Gods are literally rock stars. Their mothers were a trio of fangirl sorceresses who got impregnated by the trickster gods after a wild party while they were on tour.
Rumor has it that the Tricksters got wind of these ladies being "in a family way", were none too pleased, and planned to eliminate their bastard children in the Old School 'Gods of Myth and Legend' way... by devouring them.

Being pretty powerful sorceresses, the trio of ladies - Rose Monroe, Imani Quinn and Astrid Bjorn, (mothers of Monroe, Quinn and Bjorn, respectively, of course), sent their infant children through the membrane between omnireality to 3 different parallel Earths. Each one landed on a separate Earth and was raised by a counterpart of their mother, and watched over by she who was named Godmother to all 3 of them: Thalia, the Muse of Comedy.

Being half trickster entity and half human with sorcerous blood and boons from a Muse, (not to mention two other, secret Godparents) the demigodlings developed very powerful magicks before they'd reached their teen years. Each felt a calling. With some trial and error, (which may or may not have turned all the inhabitants of one certain reality's Earth into field mice), they found each other. They've been inseparable ever since.

At the behest of The Raven Spirit, who was technically Monroe Coyote's uncle, it was Hermes, the messenger of the gods who informed the trio about their true mothers, their true fathers, and the danger they were in. Deciding not to stay on the Earth they were on, (as it was infested with field mice) each agreed that travelling from parallel world to parallel world would be a grand adventure.

They travelled for years, decades, even, through time and space via The Crease, playing tricks, sampling mass quantities of food and beverage and bedding as many attractive folks as they could. Monroe was even to marry to a 4 tailed fox spirit calling herself Kit, but the marriage was tumultuous at best, as Kit's brand of 'mischief' bordered on EVIL and Monroe's heart truly belonged to Bjorn and Quinn, anyway.

Now, they hop from parallel dimension to parallel dimension, seeking a safe haven to perhaps settle down in permanently, but, as one would suspect, they keep running into trouble, and getting sidetracked with playing tricks, protecting the defenseless, and, more often than not, cleaning up their own messes.

Along the way, they tend to meet and interact with other gods, demigods, spirits and the like native to whichever parallel world they land on. Sometimes they find kindred spirits, and other times it doesn't go quite well. No matter what, the demigodlings' lives are anything but dull.

whiteshaix 5th Oct 2019, 11:42 PM
As much as I like the setting, I feel the need to specify that Loki would never harm one of his children... At least, not the Loki I know. Some experts think that Baldr's death was revenge for Fenrir's imprisonment and torture (and Odin clearly never heard of self-fulfilling prophecies).
So, the only way for me to keep reading is to assume that's a DIFFERENT Loki. Sorry, he's my favourite mythological being. XD
Still, I like your characters.
edit delete reply

Fear not, my friend.
When dealing with the infinite parallel and alternate universes, even gods have counterparts.
Over the course of their travels, the Misfits have met many Lokis. Good ones, evil ones...
The Loki of dimension Attica-6 was a corporate accountant and father of 3.
Bjorn's father was a rock star (So, yes, a DIFFERENT Loki), and, I'll letcha in on a little secret, as, I will be getting back to the Misfits of Mischief in 2020 - What the Misfits THINK they know about their dads MAY not necessarily be true!

Stay tuned!
(And, if you haven't seen it, give a peek at "Shelterville Shuffle", a Misfits side-story that was part of the multi-comic crossover project, "Cowboys & Crossovers" from a couple of years ago!
edit delete reply
Post a Comment