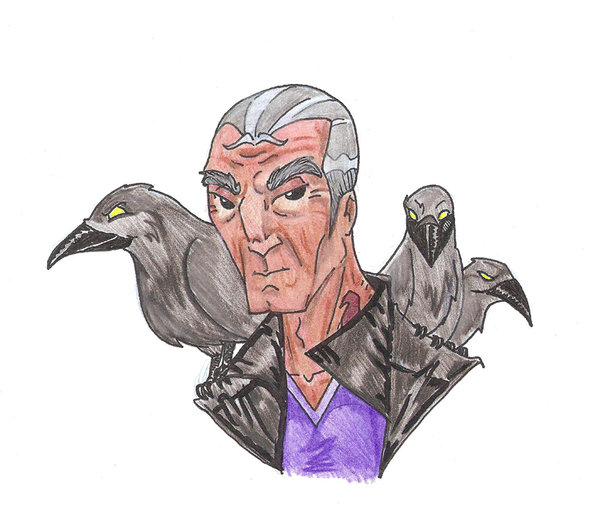 Phoenix In Crisis 27th Jul 2020, 10:07 AM
Raven, aka "Ray", is Monroe's 'uncle', in that, in their home reality, he is the spiritual "annoying little brother" to that Earth's Coyote Spirit, who is Monroe's father.


He has secretly been watching over the boys since their journey began.
he is a powerful, yet somewhat lazy spirit of mischief. Secretly, it is he who, more often than not, guides the boys' teleportation from reality to reality, in order for them to be his cat's paws in putting whatever is going on in that reality the way Raven (or his mysterious partner) wants it.

They right wrongs, change the course of events, punish the wicked and reward the good, all because Raven simply doesn't feel like bothering. He has a truly otherworldly appetite, and would rather spend his time eating whatever delicacies any given Earth has to offer in mass quantities.

He loves his nephew like a doting uncle should and is very fond of Bjorn & Quinn as well, seeing as how they make Monroe very happy.
He has no love for Monroe's ex, Kit, however, and often runs interference when the 4 tailed fox causes the boys trouble... at least, he does when he can see her coming.

His mysterious partner (currently known only as "The Hooded Figure") uses him, goading him to get up off his lazy butt and contribute to her plans. He is obviously in love with her and will readily do what she says, though there are very few other beings, deities or entities in existence that can command him.

In his human form, Raven takes the form of an older, short-haired Native American male. He always wears all black, and has a minimum of 3 feathers adorning some aspect of his clothing, whether actual feathers, or symbols adorning them. He has (often changing) black and/or dark red tattoos of ravens and/or wings and/or feathers all over his body, and is seemingly followed (guarded?) by a flock of ravens almost at all times.

Though not evil... indeed, he believes himself to be on the side of good... Raven's brand of mischief can be construed as somewhat mean-spirited, at times. You really don't wanna get on his bad side.
Raven can be placated or persuaded by feeding him. The quickest way to get him on your side is with breads, fish and corn in heaping helpings, but, be warned, he can and WILL eat you out of house and home, given the chance. He is also a trickster who tends to work his mischief verbally. Be very careful and very specific in your wording when dealing with him.
edit delete